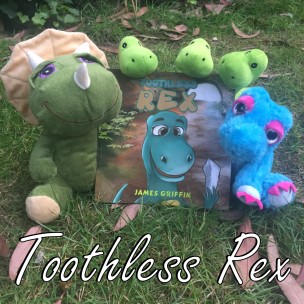 “A T-Rex born without teeth who can only make the meekest of croaks! What could be worse? Young Rex decides he’s had enough of the toothless jokes and takes flight. He then stumbles on a friendship in the most unlikely of places. It turns out to be an encounter that changes his life, and that of his new-found human friend, Bert.”

There’s something so captivating about dinosaurs and many, many children absolutely love them.  My boys are no different.  One of Rory’s favourite places to visit is our local Dinosaur Forest, he had a dinosaur birthday party and has countless dinosaur toys.  You won’t be surprised that he loves reading books about dinosaurs too.  He was absolutely delighted when Austin Macauley Publishers kindly sent us a copy of Toothless Rex to review.

With a  big picture of Rex on the cover, dinosaur lovers will instantly be drawn to Toothless Rex.  The wonderful pictures continue inside the book and beautifully compliment the story.  The font used is quite informal adding to the book’s child friendly nature.

This is a wonderful story of a dinosaur who isn’t like the others and so he learns that by being resilient and by making a good friend he can over come the difficulties he is facing.  I also really liked the message that you can be friends with anyone you like.  A dinosaur and human wouldn’t necessarily be traditional friends but it doesn’t stop Bert from helping Rex out!

Have you ever heard of a T Rex with no teeth?
As the sun rose, an egg hatched but everyone gasped, gaped and moaned to see this dinosaur had no teeth!  He was the butt of jokes so he made an escape.
You can find out more in this ROARSOME book Toothless Rex by James Griffin.  It’s amazing how each pair of lines rhyme.  This book is all about resilience because Rex must bounce back to achieve his goal.  This book is also about friendship between Rex and Bert, a dinosaur and a caveman, because they help each other out.  My favourite part was when Rex and Bert become friends.  I thought it was funny when Bert takes Rex’s teeth out so he can give them a clean.  The pictures are awesome because they are imaginative, friendly and colourful.  If you like dinosaurs or quests, this is the book for you.  I would give this book 10/10 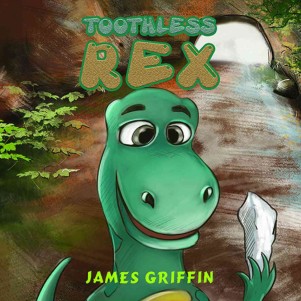